The Omen Wiki
Register
Don't have an account?
Sign In
Advertisement
in: Characters, Damien Omen II characters, Servants of Hell,
and 3 more 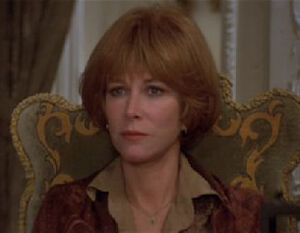 Ann Thorn was the second wife of Richard Thorn, Mark's stepmother, and Damien's adoptive aunt. She was also a secret Satanist. She was killed to ensure the Antichrist's rise to power.

Ann was one of the secret disciples of Satan who were part of the plot to ensure the Antichrist, Damien Thorn's, rise to power. When Damien was taken in by Richard Thorn and the latter's nephew Mark, Ann married Richard as his second wife.

While Ann and Richard are having dinner with Dr. Charles Warren one night (to discuss several artifacts Thorn Industries excavated from Tel Megiddo), Aunt Marion demands that Richard separate Mark and Damien; threatening to give away the 27% of Thorn Industries that she owns if he doesn't. This causes an enraged Ann to angrily order Marion to leave the dinner immediately.

Upset, Ann begs Richard to have Marion removed the next morning, which he agrees to. The next day, Ann goes to Aunt Marion to wake her and get her ready to leave, but instead finds her dead of a heart attack. The day after, Dr. Warren introduces Ann to Joan Hart at the Thorn Museum. Joan tries to warn Ann and an angered Warren that Damien is the Antichrist, but then becomes unsure and leaves at once; leaving Ann and Warren confused.

Days later, on the day after Mark's birthday, Richard, Mark, Damien and their friends, including Dr. Warren, play ice hockey on the frozen lake while Ann serves burgers and hot dogs. When Bill Atherton falls through the ice and is killed, a shaken and upset Richard goes on holiday with Ann for a while.

Some days after Richard and Ann return, when an accident at a Thorn chemical factory leaves Damien's entire academy class ill and in hospital, Dr. Kayne convinces Richard and Ann to let Damien stay in hospital for a few more days so that Kayne can run some tests.

After Damien and Mark return home from hospital, while the family are watching a movie one night, Dr. Warren comes and gives Richard a letter from Carl Bugenhagen. When Richard goes to Ann about the letter (which says that Damien is the Antichrist) the next morning, Ann angrily convinces Richard that it is absurd. Shortly after, while Ann and Richard are walking in the woods, they find Mark dead of an aneurysm while he was with Damien.

After Mark's funeral, Richard, shaken by his son's death, decides to go to New York to pick up Dr. Warren. Ann is reluctant to allow Richard to go, but he flies to New York anyway. The next day, Ann attends a ceremony at the military academy, where Damien is awarded the Officer's Saber. During the ceremony, when Richard returns from New York, Murray takes Ann from the ceremony to meet Richard at the airport.

There, Richard takes Ann with him to the Thorn Museum, now convinced beyond doubt that Damien is the Antichrist. As Richard searches Dr. Warren's office at the museum for the Daggers of Megiddo, Ann tries to convince Richard that Damien can't be the Antichrist; but Richard tries to convince Ann likewise. When Ann finds the Daggers in Warren's drawer, she stabs Richard with them to protect Damien, saying she always belonged to him.

Ann reveals her true colors to Richard as the latter dies, then screams out to Damien. The museum's boiler then explodes, engulfing Ann in flames and burning her to death.

Ann and Damien had an almost mother-son like bond. Ann was also one of the secret servants of Satan who were protecting Damien, and killed Richard to ensure Damien's safety.

Ann was a loving and caring stepmother to Mark, and was distraught and upset when Mark was killed.

Ann and Charles were apparently good friends, and were sarcastic and friendly towards one another.

Ann normally tried to be polite to Marion, but when Marion tried to get Ann and Richard to understand that Damien was evil, Ann became much more angry, short-tempered and hateful towards Marion. When Ann found Marion dead, she appeared to be shocked, but not upset at her death.