The Omen Wiki
Register
Don't have an account?
Sign In
Advertisement
in: Characters, Omen III The Final Conflict characters, Servants of Christ,
and 2 more 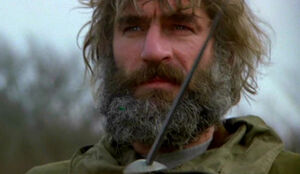 Brother Antonio was part of a group of priests from Subiaco who attempted to kill Damien Thorn.

Antonio is one of six priests under Father De Carlo at the Monastery of San Benedetto in Subiaco.

When the Daggers of Megiddo arrive at the Monastery of San Benedetto, De Carlo divides them amongst himself and his six fellow priests, including Antonio. The group then travel to England to try and kill Damien in order to ensure the Second Coming of Christ.

The seven priests station themselves at a night refuge. Benito tries to kill Damien while he is being interviewed and is off-guard, but is killed in this failed attempt. Shortly after midnight that night, Antonio travels to an observatory with Simeon and De Carlo, and they watch from there as three stars in the Cassiopeia Constellation converge; forming a second Star of Bethlehem and signalling the Second Coming.

Two days later, while Damien is participating in a fox hunt, Antonio uses a captured fox to lure him away from the other hunters and into an ambush on a bridge. Antonio and Simeon close in on Damien and prepare to stab him with their Daggers. But before Antonio can stab Damien, the latter causes Antonio's horse to throw him off its back and over the bridge's edge; sending Antonio falling into the shallow river below and instantly killing him.