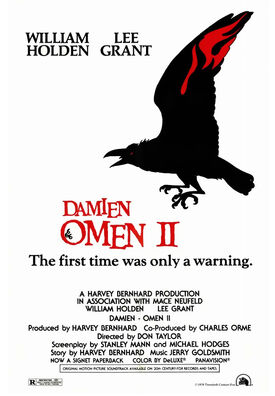 A week after Robert Thorn's death in the first film, archeologist Carl Bugenhagen (Leo McKern) asks his friend Michael Morgan (Ian Hendry) to deliver a box to the new guardian of Thorn's young son, Damien. He reveals that Damien is the Antichrist and that the box contains a letter explaining who Damien really is and how to kill him. When Morgan expresses skepticism, Bugenhagen takes him down into a ruin, to Yigael's Wall, which has an ancient depiction of the Antichrist with Damien's face. As Morgan notices that the Wall's ancient depiction of the Antichrist is indeed identical to Damien, the two are buried alive as the chamber ceiling begins to give in.

Seven years later, 12-year old Damien (Jonathan Scott-Taylor) is living with his uncle, industrialist Richard Thorn (William Holden) and his wife, Ann (Lee Grant). He gets along well with his cousin Mark (Lucas Donat), Richard's son, with whom he is enrolled in a military academy. However, he is despised by Aunt Marion (Sylvia Sidney), who favours Mark and thinks Damien is a bad influence; even threatening to cut Richard out of her will if he does not separate the two boys. The same night, the appearance of a raven wakes Marion and causes her to suffer a fatal heart attack.

Through a friend, Dr. Charles Warren (Nicholas Pryor), who is the curator of the Thorn Museum, Richard is introduced to journalist Joan Hart (Elizabeth Shepherd). She was a colleague of Keith Jennings from the previous film. Having seen Yigael's Wall, she draws a link to all the deaths that surrounded Damien, including Jennings'. She tries to warn Richard, but he throws her out of his limousine. After a confrontation with Warren and Ann Thorn at the Thorn Museum, she becomes unsure as to whether Damien's face matches the painting on Yigael's Wall. Hart goes to meet Damien at his school, but, when she sees his face, she drives off in a panic. On the road, her car's engine mysteriously dies. She is attacked by a raven, which pecks her eyes out. It flies away and, blinded, she wanders into the road where she is run over by a passing truck.

At Thorn Industries, manager Paul Buher (Robert Foxworth) suggests expanding the company's operations into agriculture; however, the project is shelved by senior manager Bill Atherton (Lew Ayres), who considers Buher's intention of buying up land in the process immoral and unethical. At Mark's birthday, Buher introduces himself to Damien, invites him to see the plant, and also speaks of his approaching initiation. Buher seemingly makes up with Atherton, who drowns after falling through the ice at a hockey game the following day. A shocked Richard leaves on vacation. As Richard agreed to the agriculture project in principle and left him in charge of the company, Buher then initiates the plans on his own.

Meanwhile, at the academy, Damien's new commander, Sgt. Neff (Lance Henriksen), takes the boy under his wing and warns him not to draw any attention to himself until the right moment. He also points him to Revelation, chapter 13, in which Damien reads about the Beast. Finding its number, 666, scarred onto his scalp, he flees the academy grounds in a terrified panic, distraught at being chosen as the vehicle for Satan's will.

Another Thorn employee, Dr. David Pasarian (Allan Arbus), alerts Buher that some people were murdered after having refused to sell their land. Before Pasarian can inform Richard the next day, his is the victim of a fatal accident at work. He and his assistant are killed by toxic fumes released from machinery that mysteriously exploded. The accident injures Damien's class, who were visiting the plant. Damien alone is unharmed, but is taken to the hospital as a precaution. A doctor (Meshach Taylor) discovers that Damien's cell structure resembles that of a jackal, but, before he can report this, he is cut in half by a falling elevator cable.

Meanwhile, Bugenhagen's box has been found in the ruins and delivered to the Thorn Museum. Dr. Warren opens it and finds the Seven Daggers of Megiddo, the only weapons able to kill the Antichrist, along with a letter explaining that Damien is the Antichrist. Warren rushes to inform Richard, who angrily refuses to believe it and throws him out of the house. The next day, Richard confronts Ann with the letter, but she convinces him that it is preposterous.

Mark, who overheard Richard's altercation with Warren, confronts Damien, who first reluctantly and then proudly admits to being the Devil's son. Damien tries to convince Mark that he truly cares for him as his brother and asks Mark to join him, but Mark refuses. Damien kills Mark by introducing an aneurysm into his brain.

Shaken by his son's death, Richard follows Warren's invitation to New York City. A half-crazed Warren takes him to Yigael's Wall, stored in a cargo carrier, on which a horrified Richard sees Damien's image. Seconds later, a switching locomotive impales Charles and crushes him against the carriage, destroying the wall and convincing Richard beyond doubt that Damien is the Antichrist.

Upon his return, Richard has Damien picked up from a ceremony at the academy and argues with Ann about him. When they find the daggers in Warren's office in the Thorn Museum, Ann uses them to kill Richard, proclaiming that she "always belonged to him". Ann is then engulfed by a fire, caused by Damien who overheard the altercation from outside. Damien, now heir to Thorn Industries, exits the museum and is picked up by the family driver, Murray, as the fire department arrives.