The Omen Wiki
Register
Don't have an account?
Sign In
Advertisement
in: Characters, The Omen 2006 characters, Servants of Hell,
and 2 more 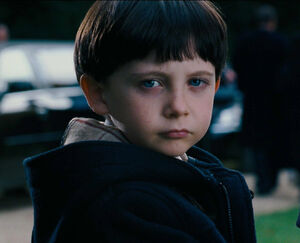 Damien Thorn is the Antichrist and the Son of Satan. He was adopted and raised by Robert and Katherine Thorn until Kate and Robert's deaths.

Damien was born of Satan and a jackal at a Catholic hospital in Rome, Italy, on June 6 at 6 AM.

Shortly after Damien is born, Father Spiletto convinces Robert Thorn to secretly switch Damien with his own dead child, who was supposedly stillborn. Robert and his wife Katherine adopt and raise Damien as their own son, and Robert never tells either Kate or Damien that Damien is not their biological son. They spend Damien's early childhood in Rome, but move to London when Robert is appointed US Ambassador.

On Damien's fifth birthday, when a Hellhound causes his nanny Holly to hang herself in front of Damien and the other children and parents at the party, Damien is the only one who isn't horrified. Mrs. Baylock is subsequently hired as a new nanny for Damien.

After Mrs. Baylock is hired, Kate and Robert take Damien to a wedding. However, just as they arrive at the wedding, the sight of the church where the wedding is taking place causes

Damien to attack Kate in a fit of fright; forcing the family to leave the wedding immediately.

One day, Damien and Kate go on a school trip with Damien's school class to a zoo, but a gorilla and several monkeys sense the evil and darkness with Damien and go into a fear-fuelled frenzy. This incident, along with nightmares of Damien that Kate has, cause Kate to subconsciously realize that Damien is the son of evil, and thus Kate and Damien become more and more distanced from one another.

One day, Damien rides on his scooter out of his room and down the landing, knocking into Kate. Kate falls from the balcony as a result and is badly injured and taken to hospital. Shortly after Kate is hospitalized, Robert leaves for Rome to investigate Damien's origins, leaving Damien in Mrs. Baylock's care.

While Robert is away, Damien and Mrs. Baylock visit Kate in hospital, and Baylock murders Kate while Damien waits outside. Later one night, while Damien is sleeping, Robert returns to London, and, unsure of whether or not Damien is the Antichrist, visits the sleeping Damien and finds the 666 birthmark on his scalp. Mrs. Baylock then attacks Robert to protect Damien, waking Damien up in the process.

After knocking Mrs. Baylock out, Robert kidnaps Damien and takes him in his car to a church to kill him with the Daggers of Megiddo. However, just before Robert can stab Damien, the police arrive and shoot and kill Robert, saving Damien.

After the deaths of his adopted parents, Damien is taken in by the U.S. President, and attends Kate and Robert's funeral in Washington D.C. with him.

Robert was a loving and caring father to Damien, and was very reluctant to kill Damien when he discovered that Damien was the Antichrist.

Initially, Kate was a concerned and loving mother to Damien, but after Kate's subconscious recognized Damien as the son of evil, the two became very distant from each other. When Kate fell from the balcony, Damien made no attempt to save her, though this may have been because he was, as a 5-year-old, not aware of how badly Kate would be injured when she fell.

Damien appeared to get along quite well with Mrs. Baylock, who was apparently highly caring and even mildly motherly towards him.