The Omen Wiki
Register
Don't have an account?
Sign In
Advertisement
in: Characters, Omen III The Final Conflict characters, Servants of Christ

View source
watch 01:36
We're Getting Mutants in the MCU - The Loop
Do you like this video?
Play Sound
Father De Carlo 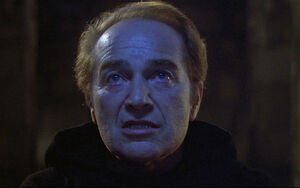 Father De Carlo is a priest from Subiaco, and was the leader of a group of priests who attempted to kill Damien Thorn.

De Carlo is a priest at the Monastery of San Benedetto in Subiaco. After Robert Thorn came to the monastery trying to discover his son Damien's origins, De Carlo watched Damien grow up over the following twenty-seven years. He watched Damien rise to power and kill anyone in his way, and realized beyond doubt that Damien is the Antichrist.

When the Daggers of Megiddo - the only weapons able to kill Damien - arrive at the monastery, De Carlo divides them among himself and his six priests; then travels with them to England to try and kill Damien in order to ensure the Second Coming of Christ.

De Carlo and his priests station themselves at a night refuge. Benito tries to kill Damien while he is being interviewed and is off-guard, but is killed in this failed attempt. Early the next morning, De Carlo, Simeon and Antonio visit an observatory and watch from there as three stars in the Cassiopeia Constellation converge, forming a second Star of Bethlehem and signalling the Second Coming.

Having failed to kill Damien before Christ's Second Coming, De Carlo and his priests switch their main priority to finding and protecting the Christ child from Damien's followers. Meanwhile, De Carlo's remaining fellow priests attempt to kill Damien over the next few days, but they fail and are all killed.

Over the following week, when Damien's disciples massacre every baby boy born in Britain between midnight and 6 AM on the morning of the Cassiopeia alignment, De Carlo notices on The World in Focus that Kate Reynolds has noticed that the sudden rise in baby mortality is very odd.

Impressed by Kate's perceptiveness, De Carlo visits her at her home that night and explains to her the truth behind the massacre and that Damien is the Antichrist. When Kate becomes skeptical of this, De Carlo shows her proof that there is no other explanation for why the boys were killed, and tells her that Damien bears the Number of the Beast, 666, as a birthmark under his hair, then leaves.

The next day, De Carlo visits Barbara Dean and warns her of the danger that her son, one of the few remaining boys born on the night of the Cassiopeia alignment, is in; and that her husband Harvey is one of Damien's disciples and the one who coordinated the massacre.

Some days later, one evening De Carlo visits Kate at her TV studio, aware that she has discovered that he was right about Damien. De Carlo warns her that Damien has recruited her son Peter as a disciple, and convinces her to help him lure Damien to a ruin where he can kill Damien with his Dagger of Megiddo.

When Kate arrives at the ruin with Peter and Damien, De Carlo tries to stab Damien, but Damien uses Peter as a human shield against the dagger. Damien then attacks a horrified De Carlo, but quickly leaves him and Kate to find Christ. After Damien dies before Christ at dawn, De Carlo carries Peter's body to Kate at the ruin's altar, and the two then leave.

Kate initially disbelieved De Carlo's claims and warning of Christ's Second Coming and Damien's identity as the Antichrist, and later became angry towards him after she discovered that he was right about Damien. However, De Carlo was able to gain her help in his mission to kill Damien and ensure Christ's Second Coming.