View source
watch 01:36
We're Getting Mutants in the MCU - The Loop
Do you like this video?
Play Sound
Harvey Pleydell Dean 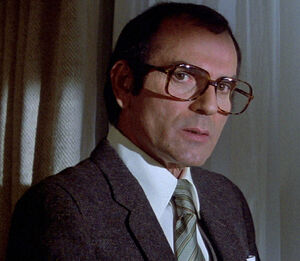 Harvey Dean was one of Damien Thorn's apostles and his right hand man. He was killed when he refused to kill his son to stop Christ's Second Coming.

Harvey Dean and his pregnant wife Barbara attend a meeting of the UN Youth Council with Damien Thorn one night. Some days later, when Damien is being interviewed by Kate Reynolds on The World in Focus, Dean is present. He notices Benito on the scaffolding above the stage, and alerts Damien just as Benito falls and burns to death.

Dean and Damien then return to Damien's estate, where Damien explains that Benito was attempting to assassinate him with one of the Daggers of Megiddo. Dean and Damien decide that they must find and collect the other six Daggers, before Dean hears that Barbara has gone into labour at hospital and rushes there.

The next day, Damien and Dean discover that Benito's six fellow priests possess the other six Daggers of Megiddo, and that they have travelled with him to England to kill Damien. Damien also explains that early in the morning, Christ was reborn.

After Damien collects three more of the Knives of Megiddo, he decides that the only way to stop Christ from rising again is by killing every male child in Britain born between midnight and 6 AM on March 24. When Dean discovers this he attempts to hide that his son, Dean Jr., is one of the children born then.

Over the following week, when Barbara becomes worried about the sudden rise in infant mortality due to the massacre by the Disciples of the Watch, Dean tries to convince her that it's a coincidence. One day, at work Damien becomes less patient with Dean and angry that he is trying to keep Kate Reynolds away from him. When Dean returns home from work, he finds that an enraged and devastated Barbara has discovered his role in the massacre of the dozens of babies.

The next day, when Dean arrives at the Embassy, Damien confronts him about Dean Jr. being one of the few remaining children born on the morning of March 24. Damien tries to get Dean to kill his son, causing a horrified Dean to flee the Embassy and run back home. He prepares to flee London with Barbara and Dean Jr., but apparently finds Dean Jr. burnt to death. Barbara, under Damien's control, then attacks Dean with an iron, hitting him in the face with it and burning and killing him.

Dean and Damien were initially on good terms, but after the Second Coming of Christ began to pressure Damien, he became more rash and less patient with Dean. When Damien ordered Dean to kill his son, Dean was horrified and called him insane.

Harvey and Barbara appeared to initially be a relatively happily-married couple. But after Barbara discovered what Dean had done, she became upset and enraged towards him.

Dean regarded Kate as a threat to Damien.