This article's title is a nickname, based upon conjecture or similar. The correct title is unknown. 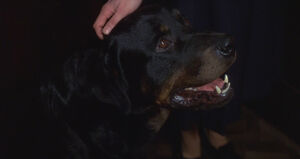 Hellhound is the unofficial name for the large black dogs which serve Satan and/or the Antichrist.

A Hellhound appears at Damien Thorn's fifth birthday party and causes his nanny, Holly, to hang herself for Damien. Shortly after, Damien notices the Hellhound and waves to it.

When Mrs. Baylock becomes Damien's new nanny, she finds the Hellhound in the grounds of the Thorn estate and brings it into the house as a watchdog for Damien (without Robert or Katherine's consent). When Robert encounters the Hellhound, he orders Mrs. Baylock to have it removed, but the Hellhound does not leave.

When Robert returns to London from Israel, he lures the Hellhound down a trapdoor into the estate's cellar, and locks it inside. When Robert kills Mrs. Baylock, the trapped Hellhound appears to sense her death and howls in what appears to be anguish.

Damien has a Hellhound as a pet dog. It lives at his estate with him, and is sent by him on various missions; including causing the American Ambassador to the UK to kill himself, Martin and Paulo to kill Matteus, and Barbara Dean to kill her and Harvey's baby son.

When Delia York wanders into the path of an oncoming truck, Ryder - a Hellhound owned by a passer-by - saves Delia by pushing her out of the way, and is subsequently adopted by the Yorks as a protector for Delia. It also serves as a companion and a servant for Delia. Delia also uses the Hellhound to kill Jo Thueson.

During Damien Thorn's fifth birthday party, a Hellhound appears and forces Holly to hang herself in front of everyone for Damien. Shortly afterwards, Damien notices the Hellhound in the lawn and waves to it.

Mrs. Baylock later brings a Hellhound into the Thorn estate as a watchdog for Damien without notifying Robert or Katherine. When Robert finds out he orders Mrs. Baylock to have it removed, but the Hellhound does not leave.

When Robert returns from Israel to kill Damien, the Hellhound hears him and chases him through the kitchen until Robert traps it down a trapdoor in the pantry.

Hellhounds are shown to be able to cause people to do what their master wants them to do, simply by staring into their eyes. It was also shown in The Final Conflict that they can sense when a powerful holy event (such as the Cassiopeia alignment which formed the second Star of Bethlehem) happens.