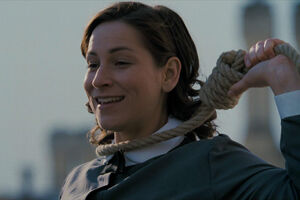 Holly was Damien Thorn's nanny before Mrs. Baylock. A Hellhound made her hang herself for Damien.

On Damien Thorn's fifth birthday party, Holly sees a Hellhound which causes her to kill herself for Damien. Holly then travels onto the roof of the Thorn estate wearing a noose around her neck. She claims to Damien that she's doing it all for him, then jumps from the roof ledge, hanging herself.

Retrieved from "https://omen.fandom.com/wiki/Holly_(2006)?oldid=5394"
Community content is available under CC-BY-SA unless otherwise noted.