The Omen Wiki
Register
Don't have an account?
Sign In
Advertisement
in: Characters, Omen III The Final Conflict characters, Servants of Christ

View source
watch 01:36
We're Getting Mutants in the MCU - The Loop
Do you like this video?
Play Sound
Kate Reynolds 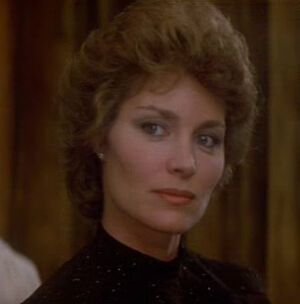 Kate Reynolds is a journalist who fell in love with Damien Thorn before discovering he was the Antichrist, and was the one who killed him.

At one point, Kate had a child, Peter Reynolds, with an unknown man who died just after Peter was born. Kate also has her own TV show, The World in Focus.

When Kate meets Damien Thorn, Britain's American Ambassador and the new president of the UN Youth Council, at a party, she quickly takes an interest in him and spends the following Sunday with him and Peter.

That night, Kate also interviews Damien on The World in Focus about youths' role in society. During the interview, Benito falls from a scaffolding on the set and horribly burns to death in an accident.

Kate and Damien begin to become romantically involved, and Kate takes Peter to a fox hunt with Damien, during which Damien bloods Peter. Over the following week, when the infant mortality rate in Great Britain abruptly rises greatly, Kate interviews Dr. Richard Philmore on The World in Focus about it one night. Dr. Philmore dismisses the rise in infant mortality as coincidence, while Kate strongly argues that there is a link as many of the babies were killed through various brutal means.

Afterwards, when Kate returns home, she is visited by Father De Carlo. He explains to her that the reason for the rise in infant mortality is because the Antichrist and his disciples are attempting to stop Christ, who came again on March 24 - which was also when all of the murdered babies were born - from rising again. De Carlo gives a skeptical Kate birth certificates to prove it and also explains to Kate that the Antichrist is Damien. He tells her that Damien has a 666-shaped birthmark under his hair to identify him as the Son of Satan, then leaves.

Kate spends the next Sunday with Damien at his estate, where she falls into the river but is seemingly saved from drowning by Damien. She then sleeps with Damien that night, during which Damien performs painful sex and sodomy on Kate; impregnating her with Damien's child.

The next morning, when Kate wakes up she finds Damien's 666 birthmark under his hair, confirming to a horrified Kate that he is indeed the Antichrist. Later that night, De Carlo visits an upset Kate and warns her that Damien has recruited Peter as a disciple. He convinces Kate to lure Damien into an ambush in order to save Peter's soul.

Kate then travels to Damien's estate in time to stop him from permanently recruiting Peter as a Satanist. Damien agrees with Kate to give her back Peter if she takes him to Christ. After begging Christ for help, Kate takes Peter and Damien to a rural ruin, where De Carlo ambushes Damien but accidentally kills Peter when Damien uses him as a human shield.

Kate is first left grieving over the death of her son while Damien goes in search of Christ, then follows Damien with De Carlo's Dagger of Megiddo. Enraged at her son's death, Kate attacks and stabs Damien from behind with the dagger. After Damien dies before Christ, Kate prays on the ruin's altar beside Damien's body, then leaves with De Carlo.

As a result of Damien's act of sodomy on Kate when they slept together, at some point she gave birth through her rectum to the new Antichrist, Damien Thorn II.

Kate initially had a romantic interest in Damien. But after she discovered that he was the Antichrist, this romance crumbled, and when Damien killed Peter, Kate attacked and stabbed him in rage.

Kate was initially skeptical of De Carlo's claims that Christ was reborn and that Damien was the Antichrist. After Kate discovered that De Carlo was right about Damien, she became more angry towards him at first, but he was eventually able to convince her to help him stop Damien.

Kate was a loving and caring mother to Peter, and when she discovered he had become an apostle of Damien she tried to save him. She was devastated when Peter was killed by Damien, and attacked and killed Damien as revenge.