The Omen Wiki
Register
Don't have an account?
Sign In
Advertisement
in: Characters, The Omen 1976 characters, Thorn family, Deceased characters

View source
watch 01:36
We're Getting Mutants in the MCU - The Loop
Do you like this video?
Play Sound
Katherine "Kathy" Thorn 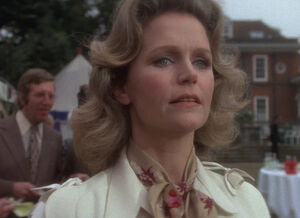 Katherine "Kathy" Thorn was the wife of Robert Thorn, and Damien's adoptive mother. She was murdered by Mrs. Baylock.

Kathy knew and loved Robert Thorn since infancy, and the two married at some point. They tried three times for a child, but Kathy miscarried the first two times.

While Robert and Kathy are in Rome, Italy, Kathy gives birth to a child in a Catholic hospital on the morning of June 6. When Robert arrives there and is informed that the child has died, he adopts another baby in its place and lies to Kathy that it is their son. Robert and Kathy name the boy Damien and raise him as their son. Robert never tells Kathy or Damien that the latter is not their biological child.

On Damien's fifth birthday, his nanny Holly hangs herself in front of all the children and parents, to Kathy's horror. A day later, a new nanny, Mrs. Baylock, is hired for Damien to replace Holly. The next day, when Robert and Kathy are preparing to go to a wedding, Kathy orders Mrs. Baylock to have Damien dressed to come with them. Mrs. Baylock tries to convince Kathy that Damien shouldn't go to a wedding, but Kathy has her get Damien ready anyway.

As soon as Robert, Kathy and Damien arrive at the wedding, the sight of the church where it is taking place causes Damien to attack Kathy out of fright, forcing the Thorns to leave the wedding immediately. After Kathy treats her bruises, she dismisses Robert's intrigue at Damien's unusually perfect health.

The next day, Kathy takes Damien on a trip to a zoo. There, several giraffes flee at the sight of Damien, and the baboons attack Kathy and Damien's car, leaving Kathy terrified and causing her to begin to realize that Damien is not a normal boy. In an attempt to get rid of her growing fear of Damien, Robert has Kathy see a psychiatrist.

Over the next few days, Kathy's subconscious recognizes Damien as the Antichrist, causing her to begin to fear him and to alienate herself from him. One morning, when Kathy discovers that she's pregnant, she asks Robert to agree to an abortion, as she doesn't want another child like Damien. However, Robert refuses due to a prediction that the unborn baby would die.

Later that day, while Kathy is watering the plants on the estate's second floor, Damien rams into her with his tricycle, causing Kathy to fall over the balcony and down to the first floor. The injuries Kathy sustains from the fall cause a concussion, a broken humerus, and cause her to miscarry. She is eventually found unconscious from the fall and is hospitalized.

Robert visits Kathy in hospital and she begs him not to let Damien kill her. Later, while Robert is in Rome, he calls Kathy in hospital in London, telling her that Tom Portman is coming to pick her up and move her to Rome. Kathy then attempts to get ready to leave, when Mrs. Baylock arrives. She throws Kathy out through the hospital window, causing her to fall onto an ambulance and killing her.

Kathy's body is taken back to Washington D.C., where she and Robert (after the latter's death later) are buried together.

Kathy and Robert were a loving and happily married couple. Robert loved Kathy deeply and did everything he could to help her.

Initially, Kathy was a loving and caring mother to Damien, but after she subconsciously recognized that he was evil, she began to fear him and distanced and alienated herself from him.

Kathy was somewhat annoyed by Mrs. Baylock's making decisions involving Damien without her or Robert's consent.