The Omen Wiki
Register
Don't have an account?
Sign In
Advertisement
in: Characters, The Omen 2006 characters, Thorn family, Deceased characters 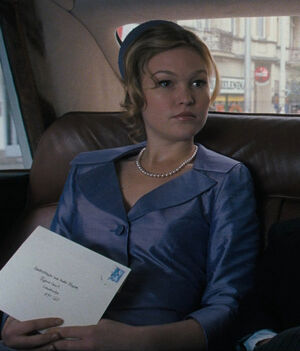 Katherine "Kate" Thorn was the wife of Robert Thorn, and Damien's adoptive mother. She was murdered by Mrs. Baylock.

Kate was happily married to Robert Thorn, and fell pregnant with a child.

Early in the morning of June 6, while Kate and Robert are in Rome, Kate gives birth in a Catholic hospital. While Kate is resting from the birth, when Robert is told that the baby was stillborn, he secretly adopts another newborn boy in its place and lies to Kate that it is their son. Kate and Robert name the boy Damien and raise him as their own son; Robert never tells either Kate or Damien that the latter is not their biological child.

Two years after Robert adopted Damien, when Steven Haines is made US Ambassador to Great Britain and Robert is made Deputy, he, Kate and Damien move with Steven to London. When Steven is killed in a car accident on the way, Robert is made Ambassador within the next three months.

Three years later, on Damien's fifth birthday, his nanny hangs herself in front of Kate and all the parents and children at the party, leaving Kate and Robert horrified. The next day, Mrs. Baylock is hired as a new nanny for Damien after his previous nanny's death. The day after Mrs. Baylock is hired, Kate and Robert decide to take Damien to church with them. Mrs. Baylock tries to convince Kate that it is not a good idea to take Damien to church, but Kate curtly orders her to get Damien ready anyway.

The moment Robert, Kate and Damien arrive at the church, the sight of the church causes Damien to attack Kate out of fright, giving her a head wound and forcing the Thorns to return home immediately. Later that evening, Robert treats Kate's head injury, and Kate expresses shock and concern at Damien's unusually perfect health, but Robert dismisses it.

One day, Kate and her friends go with Damien and his school on a school trip to a zoo, where the animals react with fear and aggression at the sight of Damien; causing Kate to realize that Damien isn't a normal boy and to begin to fear him. Kate then begins visiting a psychiatrist, Dr. Hugh Greer. Over the days, Kate begins to suffer from nightmares of Damien which cause her subconscious to recognize that Damien is the Antichrist; making Kate distance and alienate herself from Damien.

One day, Kate discovers that she is pregnant, and, not wanting to have another child like Damien, she demands that Robert allow her to have an abortion. However, Robert refuses due to Brennan's prediction that the unborn baby will die. Later that day, while Robert is visiting Dr. Greer, Kate remains at home with Damien and Mrs. Baylock.

While Kate is watering the plants on the estate's third floor, Damien rams into her with his scooter, causing Kate to fall over the balcony and down to the first floor. Kate is eventually found unconscious and is taken to hospital. Though she survives from the fall, her injuries cause her to miscarry. When Robert visits Kate in hospital, she, fully convinced by this point that Damien is evil, begs Robert not let Damien kill her.

Some days later, while Robert is away in Rome investigating Damien's origins, Mrs. Baylock visits Kate in hospital. She injects air from an empty syringe into Kate's IV, inducing an air embolism and slowly killing Kate as she helplessly tries to scream for help.

After her and Robert's deaths, Kate's body is taken back to Washington D.C., where she and Robert are buried together.

Robert loved Kate deeply and the two were happily married. Robert tried hard to help Kate, and was devastated when she was killed.

Kate was initially a concerned and caring mother to Damien and loved him deeply. But after she subconsciously recognized that Damien was the Antichrist, she began to fear him and distanced herself from him.

Kate was somewhat angered by Mrs. Baylock when she made decisions involving Damien without her or Robert's consent.