The Omen Wiki
Register
Don't have an account?
Sign In
Advertisement
in: Characters, The Omen 1976 characters, Deceased characters 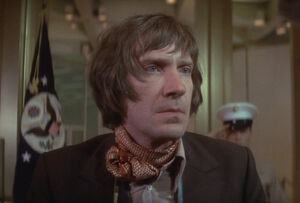 Keith Jennings was a photographer in London who helped Robert Thorn investigate Damien's origins. He was decapitated in Israel.

Keith Jennings was a photographer and had a colleague, Joan Hart.

Keith is one of the photographers who visits the fifth birthday party of Damien Thorn. When the nanny Holly hangs herself in front of everyone at the party, Keith takes several photos of the incident. When Keith develops the photos he took at the party, he notices a shade shaped like a noose around Holly's neck in a photo of her he took before she killed herself. However, Keith dismisses it as a fault in the film.

The next day, Keith is one of the reporters and photographers who try to interview and photograph Robert Thorn at the American Embassy about Holly's death. One the way up to his office, Robert accidentally walks into Keith, breaking his camera.

Robert offers to pay for the damage, but Keith kindly refuses. A short while later, when Keith notices Father Brennan being escorted from the Embassy, he takes a photo of him with another camera.

Later, when Keith develops the photo he took of Father Brennan, he notices a shade of a spear-like object in it above Brennan, much like the shade of the noose in Holly's photo. Intrigued by this, some days later, Keith takes another photo of Brennan at a rugby match. When he develops the photo, Keith finds the same spear-like shade in it, more pronounced and touching Brennan's body.

Two days later, when Brennan is impaled by a lightning rod in a bizarre accident (just as the shade in Jennings' photos of him shows), Keith investigates Brennan's apartment with the police. There, he finds that Brennan had been following Robert Thorn for a long time, and that his apartment's door and walls were covered in crucifixes and pages of the Bible. He also discovers that Brennan had a 666-shaped birthmark on his right thigh.

At Brennan's apartment, when Keith catches sight of his reflection in a mirror, he accidentally photographs himself in the mirror. He discovers that the photograph of himself also has a shade in it, which predicts that Keith will die by decapitation. Intrigued by Robert's connection with Brennan, Keith contacts Robert that night and brings him over to his flat, where he shows him his photos of Holly and Brennan.

Keith then takes Robert to Brennan's apartment, where Keith shows Robert Brennan's diary of Robert and Brennan's biopsy report of his 666 birthmark. The two also discover that when Robert's son Damien was born, a comet reshaped itself into a bright star over the European continent, much like the Star of Bethlehem; and that the time of Damien's birth corresponds to the number 666: the sixth hour of the sixth day of the sixth month. Robert confesses to Keith that Damien was secretly adopted, and the two decide to find Damien's biological parents.

The next day, Keith and Robert travel to Rome to find Father Spiletto so he can tell them who Damien's biological mother was. However, they find that the hospital where Damien was born was burnt down and then rebuilt, in the same year that Damien was born. They discover from a nurse at the new hospital that Spiletto survived the fire and is at the Monastery of San Benedetto in Subiaco. Keith and Robert then travel to Subiaco, and on the way, Keith discovers that the events that the Bible predicts would signal the birth of the Antichrist happened when Damien was born. Keith and Robert eventually reach the monastery, where they discover that Spiletto has been left mute and horribly burnt by the fire that destroyed the old hospital in Rome. When Robert demands to known from Spiletto where Damien's biological mother is, Spiletto manages to write down that she is buried in Cerveteri. Keith and Robert then travel to Cerveteri as night falls, and find the graves of Robert's biological son and Damien's mother.

They discover from the corpses in the graves that Damien's mother was a jackal, to Keith's horror, and that Robert's son was actually murdered at birth to get Damien adopted by the Thorns.

A pack of Hellhounds then arrive and attack Keith and Robert. However, the two manage to escape Cerveteri before the hounds can kill them, and return to their hotel. There, Keith and Robert set about tracking down the city of Tel Megiddo that Brennan instructed Robert to go. Keith discovers the location of Megiddo, and the next day, he and Robert travel to there and meet up with Carl Bugenhagen, who gives Robert the Daggers of Megiddo and tells him how to use them to kill the Antichrist.

Afterwards, Robert, believing Damien to be an innocent child, refuses to kill him and throws the Daggers away. Keith vows to kill Damien himself if Robert won't do it, then goes to retrieve the Daggers. While Keith is picking the Daggers up, a runaway truck reverses towards him.

A sheet of glass slides off of the back of the truck, slicing Keith's head off and killing him.