The Omen Wiki
Register
Don't have an account?
Sign In
Advertisement
in: Characters, The Omen 2006 characters, Deceased characters 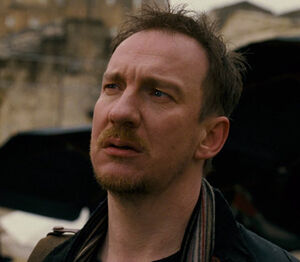 Keith Jennings was a photographer in London who helped Robert Thorn investigate Damien's origins. He was decapitated in Israel.

During Damien Thorn's fifth birthday party, Keith is one of the photographers and reporters who visit the party. When Damien's nanny Holly hangs herself in front of everyone at the party, Keith takes several photos of her death.

When Keith develops the photos he took at the party, he notices that the photos which have Holly in them all have a shade shaped like a noose around her neck, to Keith's intrigue. The next day, Keith is one of the photographers and journalists who photograph and try to interview Robert Thorn outside the American Embassy. Robert accidentally walks into Keith, breaking his camera, and offers to pay for the damage; but Keith refuses the offer.

Later, when Keith notices Father Brennan being escorted from the Embassy, he takes several photographs of him. At home, when Keith develops the photos he took of Brennan, he notices that all of them have a spear-shaped shade above him, like the noose-shaped shade in Keith's photos of Holly. Intrigued by this, when Keith sees Brennan again ten days later at an opera, he takes several more photographs of Brennan. When he develops these photos at his flat, they all have the spear-like shade as well, only more pronounced and touching Brennan's body.

Two days later, when Father Brennan is impaled by a lightning rod and killed, just as the shade in Keith's photos of him showed, Keith investigates Brennan's apartment with the police. He finds the flat's door and walls covered with crucifixes and pages of the Bible, and that Brennan had been following Robert Thorn for a long time. Keith also discovers that Brennan had a 666-shaped birthmark on his right thigh. At the apartment, when Keith catches sight of his reflection in a mirror, he takes a photo of himself in the mirror. He discovers another shade in the photo of his reflection, which indicates that he will die by decapitation.

Keith calls Robert and takes him over to his flat, where he shows him the photos he took of Holly and Brennan before their deaths. He then takes Robert over to Brennan's flat, where he shows him Brennan's diary of everywhere Robert went, as well as the biopsy report on Brennan's 666 birthmark. While they are there, Keith and Robert also discover that on the day that Robert's son Damien was born, a comet reshaped itself into a glowing star over Europe. Keith discovers as well that the time of Damien's birth corresponds to the number 666: the sixth hour of the sixth day of the sixth month.

Keith and Robert decide to further investigate Damien's origins, and travel to Rome to find Father Spiletto so that he can lead them to Damien's biological mother. However, when Keith and Robert travel to the Catholic hospital where Damien was born, they find that it burnt down and was rebuilt in the same year that Damien was born. They discover from a nun who survived the fire that Spiletto is in the Monastery of San Benedetto in Subiaco.

Keith and Robert then travel to Subiaco, and on the way, they discover that the events that the Bible predicts would signal the birth of the Antichrist occurred when Damien was born. Keith and Robert eventually reach the monastery, where they find Spiletto mute and horribly disfigured. He manages to write down to Keith and Robert that Damien's biological mother is buried in Cerveteri, and the two travel to there as night falls.

Keith and Robert find the graves of Robert's biological son and Damien's mother in Cerveteri. They discover from the corpses in the two graves that Damien was born of a jackal, and that Robert's son wasn't actually stillborn, but was murdered at birth to get Damien adopted by the Thorns. A pack of Hellhounds then arrive at Cerveteri and attack and chase Keith and Robert before the two escape the cemetery from them.

When Keith goes to retrieve the Daggers, just as he picks them up, a metal sign falls and decapitates and kills him.