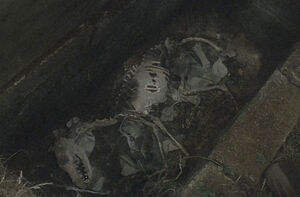 Maria Scianna was the alias of a female jackal, who was Damien Thorn's biological mother.

This jackal gave birth to the Antichrist and Son of Satan, Damien Thorn, at a Catholic hospital in Rome, at 6 AM on 6 June. The jackal apparently died of the birth and was buried in Cerveteri under the alias of Maria Sciana.

Five years after the jackal's death, Robert Thorn and Keith Jennings open her grave and find her corpse inside, which has by then decomposed to little more than a skeleton.

The jackal is further identified as Damien biological mother, a week after, when Bugenhagen takes his colleague to a local ruin to see the mural of Yigael's Wall, said to have been drawn by an insane monk who saw the Devil and had visions of the Antichrist as he would appear from birth to death; the wall foreshadows the jackal which gave birth to Damien.

Seven years after, when in hospital following a toxic leak at Thorn Industries, Damien's blood tests reveal his blood cells are those of a jackal. However, before Dr. Kane can investigate any further in reporting his findings, he is killed by a falling elevator cable.

Later, Dr. Charles Warren unboxes the seven daggers of Megiddo from Bugenhagen, in which includes a letter detailing Damien's birth. This revelation is told to Richard Thorn and overheard by his son Mark, whom the next morning tells Damien, who already is aware of his full parentage.

When Damien, now thirty-two year old international conglomerate CEO, prepares for the Second Coming of the Messiah, he seeks solitude in a secret room in which a monument of a Crucified Jesus is situated. There, whilst spiting, he makes mention of their parallel whilst Jesus was born of a woman, he himself was "conceived of a jackal".

Retrieved from "https://omen.fandom.com/wiki/Maria_Sciana?oldid=6566"
Community content is available under CC-BY-SA unless otherwise noted.