The Omen Wiki
Register
Don't have an account?
Sign In
Advertisement
in: Characters, Omen IV The Awakening characters, Servants of Christ, Deceased characters 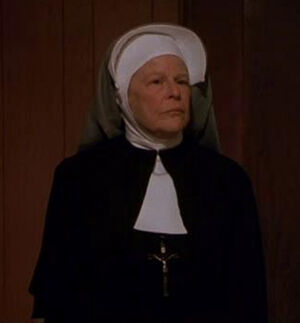 The Mother Superior of St. Francis Orphanage died of a heart attack on the night her orphanage gave Delia York to the Yorks.

When the baby girl Delia was given to St. Francis Orphanage, Mother Superior, aware that Delia is the granddaughter of Satan, has Sister Yvonne give the baby Delia away to Gene and Karen York; rather than kill Delia.

The Mother Superior initially comforted Yvonne after they gave Delia to the Yorks, but when Yvonne rudely confronted the Mother, the latter beat and struck Yvonne repeatedly.