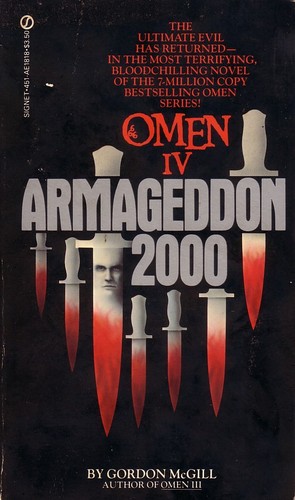 Omen IV: Armageddon 2000 is a 1983 novel published by Gordon McGill. It is a sequel to The Final Conflict, and is completely unconnected to the 1991 film, Omen IV: The Awakening.

"Damien Thorn, spawn of Satan, was dead, slain by one of the sacred daggers of Armageddon. Even Father De Carlo, his most brilliant opponent, believed the greatest threat the world had ever known was defeated for eternity.

Only the innermost circle of Damien's disciples knew of his unnatural coupling with a beautiful, helpless victim. Only they knew of the Son born of that horrific ravishment.

But now the boy was growing up, and already his powers could be felt... as the globe began to split in savage struggle, and the new emperor of evil mounted to the throne of hell on earth..."

Retrieved from "https://omen.fandom.com/wiki/Omen_IV:_Armageddon_2000?oldid=4709"
Community content is available under CC-BY-SA unless otherwise noted.