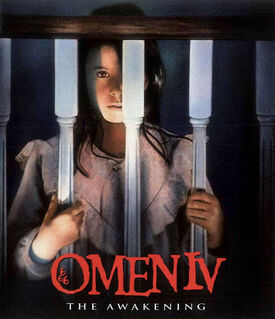 Omen IV: The Awakening is a 1991 made-for-television film that serves as the fourth and final installment in the original Omen series. Directed by Jorge Montesi and Dominique Othenin-Girard. It is unrelated to the books, Omen IV: Armageddon 2000, or Omen V: The Abomination.

This was intended to be the first of many television sequels to Twentieth Century Fox's popular film titles. Co-written by Harvey Bernhard, producer of the first three films, he felt that more could be done in the series. He previously wrote the story for the second film.

The story concentrates on a child of mysterious origin called Delia (Asia Vieira), who is adopted by two attorneys, Gene (Michael Woods) and Karen York (Faye Grant). At first, all seems normal, but Jo, their nanny with remarkable psychic powers, begins to learn aspects of Delia's personality that become very suspicious. Jo takes her to a fair for other people with psychic powers. All of them sense trouble at Delia's arrival, such as the tarot reader's Devil card and the blind seer's distress when she nears him. When Noah, Jo's friend, takes an aura picture of Delia and sees very dark colors, which is like her personality, Noah finds out she is evil. When Delia finds out what they're up to, she gets angry and the whole fair catches fire.

When meditating with Delia to help her discover why Delia is so full of negative energy, Jo finds out who Delia really is, and is pushed out the window by Delia's dog. Increasingly alarmed and suspicious of her adoptive daughter, Karen hires a private investigator to learn the identity of Delia's real parents. What follows is a string of bizarre accidents, resulting in Karen falling into a paranoid state as she fears people are conspiring against her. What's worse, Karen's pregnancy increases her feeling of paranoia around Delia. It is revealed that Delia is the daughter of Damien Thorn, the Antichrist, thus the granddaughter of Satan.

At first, the viewer is unable to tell who was shot, but the camera then cuts to a funeral scene attended by Gene, Alex and Delia, revealing that Karen shot herself.

Retrieved from "https://omen.fandom.com/wiki/Omen_IV:_The_Awakening?oldid=4825"
Community content is available under CC-BY-SA unless otherwise noted.