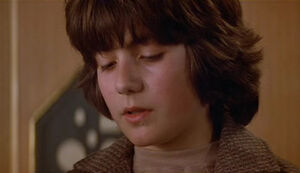 Peter was Kate Reynolds' son and one of Damien Thorn's apostles. He was killed when Damien used him as a human shield.

Peter's father died just after he was born to him and Kate Reynolds. According to Kate, Damien Thorn's ideas and influence made a big impression on Peter.

When Kate begins to become romantically involved with Damien Thorn, Damien first takes Peter to a park and allows him to play fetch with his dog. Due to his lack of a father, Peter quickly begins to see a fatherly figure in Damien.

Kate allows Peter to participate in a fox hunt with Susan and Damien some days later. After the hunt, when Damien returns he bloods Peter with what is believed to be, unknown to the latter, human blood from Simeon.

At some later point, Damien recruits Peter as a disciple and gets him to follow and spy on Father De Carlo. When Peter observes De Carlo visiting Barbara Dean to warn her about the danger her baby is in, he reports this to Damien; who in turn orders a horrified Harvey Dean to kill his baby in an attempt to ensure that Christ does not return to power.

That night, Damien takes Peter to his estate and prepares to fully recruit him as an apostle. However, Kate arrives in time before Peter can be recruited, and Damien agrees to give her back Peter if she takes him to Christ. Kate takes Peter and Damien to a rural ruin, where De Carlo ambushes Damien with one of the Daggers of Megiddo. However, Damien uses Peter as a human shield, causing De Carlo to unintentionally stab and kill Peter instead.

Because Peter never had a father, he saw a fatherly figure in Damien and performed missions such as spying for him. He even came to trust Damien over Kate.

Though Kate was a loving and caring mother to Peter, after Peter came to see Damien as a fatherly figure and became one of his disciples, he came to trust Damien over Kate.