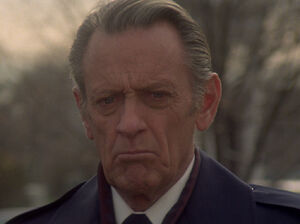 Richard Thorn was the brother of the late Robert Thorn, and the adopted uncle of Damien. Richard raised Damien after Robert's death until he discovered that Damien was the Antichrist, and was stabbed and killed.

Richard had a brother, Robert, and attended Davidson Military Academy with him. Richard was at one point married to an unknown wife, with whom he had a son, Mark. Richard at some point married again, this time to Ann.

When Robert died trying to kill his son Damien, Richard took over Thorn Industries from him; and Damien came to live with Richard, Ann and Mark in Chicago.

At dinner one night with Richard's friend Dr. Charles Warren (to discuss the ancient artefacts recovered from the ruins of Tel Megiddo by Thorn Industries), Aunt Marion demands that Ann and Richard separate Mark and Damien, threatening to give the 27% of Thorn Industries that she owns away to charity if they don't. Enraged, Ann and Richard order Marion to leave the dinner immediately, and decide to have her leave the next day.

At Thorn Industries the next day, Richard discusses manager Paul Buher's plans to expand the corporation's projects into agriculture with him and senior manager Bill Atherton. Paul believes that the project will ensure Thorn Industries' future, while Bill believes that buying up land in the process is heartless and unethical. When Richard hears that Marion has died of a heart attack, he is forced to leave at once.

At dinner with Paul the next day, Richard ultimately agrees with Bill and has Paul's agricultural project shelved for the time being. As he is leaving work later that day, Richard meets reporter Joan Hart, who tries to interview him. When Joan asks Richard about the late Carl Bugenhagen, and about the link between his and Robert's deaths, Richard has her removed from his limo at once. The day after Mark's birthday, while Richard, Mark, Damien and their friends are playing ice hockey on the Thorn residence's frozen-over lake, Bill falls through the ice and is apparently killed; leaving Richard deeply upset.

Shaken by his old friend's death, Richard decides to take a vacation with Ann and to leave Paul in charge of Thorn Industries in the meantime. When Richard returns from vacation, he discovers that Paul has started the agriculture project without telling him, and scolds Paul for it. When an accident with the machinery containing chemicals at the chemical plant occurs one day while Mark and Damien and their class are on a trip there, they are taken to hospital.

At the hospital, Dr. Kayne explains to Richard that Damien was completely unaffected by exposure to the chemicals like the rest of the class were, and also that Damien apparently has a different cell structure; and thus Damien stays in hospital for a short while longer so Dr. Kayne can run some tests.

While the Thorns are watching a movie at home one night, Charles visits Richard and gives him a letter that was found with Bugenhagen's corpse in Megiddo. Charles explains that according to Bugenhagen, Damien is the prophesized Antichrist, and that Yigael's Wall, which arrives in New York City the next day, can prove it. Richard angrily refuses to believe it, but reads the letter from Bugenhagen anyway and becomes less sure.

Richard discusses it with Ann the next day, who angrily rebuffs it and refuses to allow Richard to believe it. While Ann and Richard are walking that day, Mark mysteriously dies of an aneurysm while he is with Damien. Shaken by his son's death, after Mark's funeral, Richard flies to New York to pick up Charles. He finds Charles incoherent and babbling about Yigael's Wall and Damien, causing Richard to angrily have Charles take him to the Wall.

Charles takes Richard to the cargo carrier containing Yigael's Wall, where Richard discovers Damien's image on the Wall, horrifying him and convincing him beyond doubt that Damien is the Antichrist. Charles is then killed when a locomotive crushes him against the carrier. Knowing that Damien must die, Richard returns to Chicago that night. He has Murray pick Damien up from the Davidson academy and taken to the Thorn Museum, while Richard and Ann go there looking for the Daggers of Megiddo.

Ann tries to convince Richard that it is impossible for Damien to be the Antichrist, but Richard tries to convince her likewise. When Ann finds the Daggers of Megiddo in Charles' office, Richard orders her to give them to him to kill Damien. Ann then stabs Richard with three of the Daggers to protect Damien, killing him.

Richard had a father-son bond with Damien and initially tried to deny that Damien was the Antichrist. However, when Richard saw Damien on Yigael's Wall, he became convinced beyond doubt that Damien was evil and that he had to die.

Ann and Richard were initially a happily married couple. However, after Richard began to discover that Damien was the Antichrist, his and Ann's relationship became more and more strained. Ann also stabbed and killed Richard to protect Damien, and did not show and remorse or empathy over it.

Richard was as much a loving and caring father to Mark as he was to Damien, and was shaken and devastated by Mark's death.

Richard and Charles were good friends. After Charles began to believe that Damien was the Antichrist, Richard became more angry and short-tempered with him.

After Robert died trying to kill Damien, Richard came to believe that Robert was mentally ill.

Richard believed that Marion was a mentally ill old woman, and was short-tempered towards her when something involved her hatred for Damien.

Richard was initially on good terms with Paul and assured him that his time as head of Thorn Industries would come. However, when Paul started an agriculture project without Richard's knowledge, Richard scolded him for not informing him.