The Omen Wiki
Register
Don't have an account?
Sign In
Advertisement
in: Characters, The Omen 1976 characters, Thorn family, Deceased characters

View source
watch 01:36
We're Getting Mutants in the MCU - The Loop
Do you like this video?
Play Sound
Robert Thorn 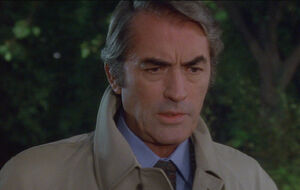 Robert Thorn was Damien Thorn's adoptive father, and the CEO of Thorn Industries before he died trying to kill Damien to stop the Antichrist.

Robert was the son of the wealthy Reginald Thorn and inherited millions of dollars. He also had a brother, Richard, with whom he attended Davidson Military Academy in Chicago. He was also always an athlete, and served as the quarterback of the Davidson Academy's rugby team during his academy years.

At some point, Robert became the CEO of Thorn Industries. He also married Kathy, whom he had known and loved since infancy. The two tried three times for a child, but Kathy miscarried the first two times.

While Robert and Kathy are in Rome, Italy, Kathy gives birth to a son in a Catholic hospital early in the morning of 6 June. Robert rushes to there, but when he arrives, Father Spiletto tells him that, unbeknownst to Kathy, the baby was stillborn. Spiletto suggests that Robert adopt a child to replace the supposedly stillborn baby instead. Robert is at first reluctant, but, concerned for Kathy's mental well being, he eventually agrees to adopt a baby boy and to lie to Kathy and the child that it is their biological son.

Robert and Kathy name the boy Damien and raise him as their child. They also move from Rome to London during Damien's early childhood when Robert is appointed US Ambassador to Great Britain. However, on Damien's fifth birthday party, his nanny Holly hangs herself in front of all the children and parents, to Robert and Kathy's horror.

The next day, at the Embassy, Father Brennan visits Robert and claims that he witnessed Damien's birth and saw his true mother. However, Robert mistakes what Brennan is trying to say for blackmail, and before Brennan can warn Robert about Damien's origins, Robert has a Marine guard remove him from the building.

That same day, a new nanny for Damien, Mrs. Baylock, arrives to replace Holly. The next day, Robert, Kathy and Damien go to a wedding. However, the moment they arrive, Damien attacks Kathy in fright at the sight of the church where the wedding is taking place, forcing Robert and Kathy to return home with him. After Robert treats the wounds Damien gave Kathy, they discuss Damien's unusually perfect health. Robert then finds a vicious dog outside of Damien's room, which Mrs. Baylock confesses to having brought into the house as a watchdog for Damien. Robert scolds Mrs. Baylock for giving Damien a dog without his or Kathy's consent, then orders her to have the RSPCA take it away in the morning.

The next day, while Kathy and Damien are away at a zoo, Robert notices Father Brennan stalking him, and that night, Kathy confesses to becoming scared of Damien. The next day, while Robert is watching a rugby match, Brennan visits him and tells him to meet him in Bishop's Park the next day at 2:30; warning Robert that Kathy is in danger and will die if he doesn't listen to what Brennan has to say.

Robert meets Brennan in Bishop's Park the next day as agreed, and Brennan tells him that Damien is the Son of the Devil, and that Kathy is pregnant. He predicts that Kathy's unborn child will die, then Kathy herself, and then Robert once Damien is certain to inherit Thorn Industries from him. Robert refuses to believe Brennan, and demands that he never see Brennan again, then leaves.

The next morning, Kathy reveals to Robert that, as she has just found out, she is pregnant; just as Brennan had predicted. Robert then discovers in the morning newspaper that Father Brennan died the previous day, just minutes after he spoke with Robert. He later visits Kathy's psychiatrist, Dr. Hugh Greer, who explains that Kathy is suffering from a seeming fantasy that Damien is evil and is not her son. Greer advises Robert to agree to an abortion, but Robert refuses due to Brennan's prediction that the unborn baby will die.

While Robert is away at Dr. Greer's, Kathy falls from the house's second floor to the first and is hospitalized. At the hospital, Dr. Becker explains to Robert that while Kathy has survived and will recover, the fall has caused her to miscarry the unborn baby, fulfilling Brennan's prediction that the unborn child would die first.

That night, journalist Keith Jennings phones Robert and asks him to come over to his flat. There, Keith shows Robert that several photos he took of Holly and Brennan show how they died. Robert and Jennings go to Brennan's old flat, where Jennings reveals that Brennan had been following Robert for a long time. The two also discover that on the day Damien was born, a comet changed into a new star, similar to the Star of Bethlehem, over Europe; and that the time of Damien's birth constitutes the Number of the Beast (666): the sixth hour of the sixth day of the sixth month.

The next morning, Robert decides to return to Rome with Jennings to find Damien's biological mother and investigate his origins. He promises Kathy that he will return, and orders Mrs. Baylock to take care of Damien while he is away. In Rome, Jennings and Robert find that the original hospital Damien was born in burnt down in the same year that Damien was born, and learn from a nurse in the rebuilt hospital that Spiletto is in the Monastery of San Benedetto in Subiaco.

Robert and Jennings travel to Subiaco, and on the way they discover that the events that a Biblical poem predicts will signal the birth of the Antichrist occurred when Damien was born. Jennings and Robert eventually reach the monastery, but find Spiletto has been left mute and catatonic due to horrible burns sustained in the fire that destroyed the original hospital. After a monk explains to Robert and Jennings the meaning of the Number of the Beast, Robert demands to know from Spiletto where Damien's mother is. Spiletto manages to write down to Robert that Damien's mother is buried in Cerveteri.

Robert and Jennings travel to Cerveteri, where they discover from the graves of Damien's mother and Robert's son that Damien's mother was in fact a jackal, and that Robert's son was not actually stillborn; but was murdered as soon as he was born to get Damien adopted by the Thorns, leaving Robert enraged at his son's fate. A pack of Hellhounds then attack Cerveteri, but Keith and Robert narrowly escape before the dogs can kill them.

After Robert and Jennings return to their hotel, they decide to travel to Tel Megiddo to find Bugenhagen as Brennan had instructed Thorn. Robert phones back to London and orders Tom Portman to pick up Kathy from the hospital and move her to Rome, but Robert is later called and told that Kathy has been killed; leaving him heartbroken and causing him to decide to kill Damien after all.

The next day, Robert and Jennings travel to Megiddo and meet Bugenhagen inside the ruins. Bugenhagen gives Robert the Daggers of Megiddo with which to kill the Antichrist, and explains that Damien must be killed in a church, and that the Daggers must be stabbed through Damien's chest in a sequence that forms the cross. When Robert becomes doubtful that Damien is the Antichrist, Bugenhagen informs him that if Damien is indeed the Son of Satan, then he will have a birthmark shaped like three sixes somewhere on his body.

After, when Jennings confronts Robert about what Bugehagen said, Robert refuses to stab Damien and throws the Daggers away. When Jennings goes to retrieve them and is decapitated by an accident with a runaway truck, Robert becomes convinced and returns to London late at night with the Daggers of Megiddo. Sneaking into his house and locking Mrs. Baylock's watchdog in the basement, Robert searches the sleeping Damien for the 666 birthmark, and finds it underneath his hair on his scalp; confirming that Damien is the Antichrist.

Just then, Mrs. Baylock attacks Robert and tries to kill him until he kills her in the kitchen by stabbing her through the neck with a carving fork. Robert then kidnaps Damien and drives with him to a church with the police in pursuit. Inside the church, Robert reluctantly prepares to stab Damien with the Daggers of Megiddo, when two policemen arrive and shoot and kill Robert.

Robert's body is taken back to Washington D.C. in America, where he is buried alongside Kathy.

Robert was a loving and caring husband to Kathy, and deeply feared how she would react to the death of their biological son due to her emotional instability. He did everything he could to help her, and was deeply heartbroken when she was killed.

Robert became a loving and caring father to Damien and deeply loved him. After Kathy was killed, Robert decided that he wanted to kill Damien. However, he still tried to deny that Damien was the Antichrist when he discovered how Damien must die, and he was visibly reluctant to stab Damien due to the fact that he deeply loved Damien too much and when he was about to kill him with the Daggers of Megiddo.

Robert scolded Mrs. Baylock for making decisions without his or Kathy's permission and against their wishes.

Robert had a strong dislike for Father Brennan before he died for calling Damien the Son of Satan, and because Robert mistakenly believed at one point that Brennan was trying to blackmail him.

Little is known about Robert's relationship with his brother Richard. However, after Robert died trying to kill Damien, Richard came to believe that Robert was mentally ill.