The Omen Wiki
Register
Don't have an account?
Sign In
Advertisement
in: Characters, The Omen 2006 characters, Thorn family, Deceased characters

View source
watch 01:36
We're Getting Mutants in the MCU - The Loop
Do you like this video?
Play Sound
Robert Thorn 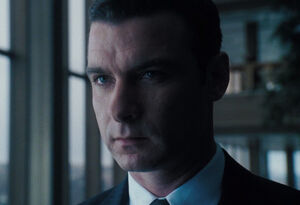 Robert Wade Thorn was Damien Thorn's adoptive father, and a U.S. Ambassador before he died trying to kill Damien to stop the Antichrist.

Robert was native to Conneticut and was the CEO of Thorn Industries. He was married to Katherine, and conceived a child with her.

While Robert and Kate are in Rome, Italy, Kate gives birth to their child in a Catholic hospital. But when Robert arrives there, Father Spiletto informs him that the baby was stillborn and that Kate does not yet know. Spiletto suggests that Robert adopt another child in the "stillborn" child's place, and that he tell Kate and the child that it is their biological son.

Though Robert is unsure of doing it at first, he eventually agrees to adopt an orphaned baby. Robert and Kathy raise the child as their own and name him Damien. When Robert's friend Steven Haines is appointed US Ambassador to Great Britain, he appoints Robert Deputy and thus he, Kate and Damien move to London to meet him there. However, on the way to London, Steven is killed in a car accident and thus the U.S. President appoints Robert Ambassador three months later.

On Damien's fifth birthday, when his nanny Holly hangs herself in front of the parents and children, Robert rushes to Damien to shield him from the sight. The next day, at the Embassy, a priest called Father Brennan meets Robert and reveals that he knows about Damien's origins and more. However, Robert has him removed from the building, but not before Brennan reveals that Damien's biological mother was a jackal.

After Robert returns home from the Embassy, a new nanny, Mrs. Baylock, arrives to replace Holly and is hired. A day later, Robert and Kate take Damien with them to church. However, just as they arrive, the sight of the church causes Damien to attack Kate out of fright, forcing Robert and Kate to return home with him immediately.

After Robert treats a head injury that night that Damien gave Kate, he visits a sleeping Damien in his bedroom and finds that Mrs. Baylock has brought a vicious dog into the house as a watchdog for Damien. Robert orders Mrs. Baylock to have the dog taken away in the morning, and reminds her that he will get Damien a dog himself if Damien needs one.

One day, at an opera, Father Brennan visits Robert again and tells him to meet him under the bridge in Bishop's Park the next day at 1:00; warning him that Kate is in danger and will die if Robert doesn't come. As agreed, Robert meets Brennan in Bishop's Park, where Brennan explains to him that Damien is the Son of the Devil; and that Kate is pregnant, but the unborn child will be killed by Damien, and then Kate will die, then Robert himself. Brennan instructs Robert to see Bugenhagen in Tel Megiddo, Israel, who will show him how to kill the Son of Satan. But Robert refuses to believe what Brennan has just said, and warns him to stay away from him and his family.

Robert then leaves and returns home, and discovers the next morning that Kate is pregnant, just as Father Brennan predicted, and she wants an abortion. He also discovers that Brennan died in a bizarre accident just minutes after Robert met up with him the previous day. Shortly after, Robert visits Kate's psychiatrist Dr. Hugh Greer, who explains that Kate is suffering from a supposed fantasy that Damien is evil and isn't her son. He advises Robert to agree to an abortion, but Robert refuses due to Brennan's prediction that the unborn baby will die.

While Robert is away, Kate falls from the second floor in the house and is hospitalized. Robert then visits Kate in hospital, where a nurse explains that while Kate will recover, the fall has caused her to miscarry; fulfilling Father Brennan's prediction. Robert is later phoned by photographer Keith Jennings, who asks him to come over to his flat.

There, Jennings shows Robert several different photos of Brennan and Damien's nanny he took before they died, which all show premonitions of how they would die. They then go to Brennan's old flat, where Jennings shows Robert that Brennan had been following him for a long time. Robert and Jennings also discover that when Damien was born, a comet changed into a glowing star over Europe much like the Star of Bethlehem; and that the time of Damien's birth corresponds to 666, the Number of the Beast: the sixth hour of the sixth day of the sixth month.

Robert decides to return to Rome with Jennings to investigate Damien's origins, promising Kate that he'll be back and leaving Damien in Mrs. Baylock's care in the meantime. After Robert and Jennings arrive in Rome, they find that the old hospital Damien was born in burnt down in a fire, and discover from a nun there who survived the fire that Spiletto is now in the Monastery of San Benedetto in Subiaco.

Robert demands to know from Spiletto where Damien's biological mother is, and Spiletto writes down that she is buried in the cemetery of Cerveteri. Robert and Jennings then travel to Cerveteri, where they discover that Damien's biological mother was a jackal, just as Father Brennan said. They also discover, to Robert's grief and horror, that his biological son wasn't stillborn, and was actually murdered once he was born to get Damien adopted by the Thorns.

A pack of Hellhounds then arrive at the cemetery and attack Robert and Jennings, but the two are able to narrowly escape from them. Jennings and Robert return to their hotel, where Robert is called by Tom who informs him that Kate has been killed; leaving Robert heartbroken and causing him to decide to kill Damien after all. Robert and Jennings travel to Megiddo, where they meet Bugenhagen. Bugenhagen gives them the Daggers of Megiddo, and explains that Damien must be killed with them on a church altar. When Robert becomes unsure of whether Damien really is the Antichrist, Bugenhagen instructs him to search for a birthmark in the shape of three sixes on his body.

Afterwards, Robert, refusing to stab the boy he has raised as his own son, falls into denial that Damien is the Antichrist and throws the Daggers away. When Jennings then goes to retrieve the Daggers, he is decapitated by a falling sign, convincing a horrified Robert.

Robert returns by plane to London late at night, and sneaks into his home. After trapping the watchdog beneath a trapdoor in the pantry, Robert goes into Damien's room and finds the 666 birthmark on Damien's scalp under his hair; confirming beyond any doubt that Damien is the Antichrist.

Mrs. Baylock then attacks Robert, but he manages to momentarily knock her out and kidnaps Damien. Robert rushes out to his car with the abducted Damien, pursued by Mrs. Baylock, whom he runs over with the car. Robert drives with Damien to a church with the police in pursuit, where he tearfully prepares to kill Damien with the Daggers. However, at the last second before Robert can't bring himself to stab Damien, the Diplomatic Protection Group arrive and shoot and kill Robert.

After his death, Robert is buried together with Kate in Washington D.C.

Robert deeply loved his wife Kate, and was concerned for her mental well being. He did all he could to help her, and was left devastated and heartbroken when she was killed.

Robert loved Damien deeply as his own son. Robert decided that he wanted Damien dead after Kate was killed, but when he discovered how Damien must die, he changed his mind about this and tried to deny that Damien was the Antichrist until he found that he it was true. Even after Robert discovered that Damien really was the Son of Satan, he still loved him and was tearful and reluctant about having to kill Damien.

Robert strongly disliked Father Brennan before the latter died, because he called Damien the Son of the Devil; Robert also viewed Brennan as a madman.