The Omen Wiki
Register
Don't have an account?
Sign In
Advertisement
in: Citations needed, Characters, Servants of Hell,
and 3 more

View source
watch 01:36
We're Getting Mutants in the MCU - The Loop
Do you like this video?
Play Sound
Satan 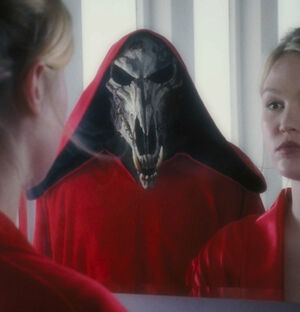 Lucifer, also known as The Devil, Satan, the Desolate One or the Fallen Angel, is regarded by Christianity and various religious groups as the supreme overlord of the hierarchy of Hell.

It was indicated by Damien Thorn in The Final Conflict that the accidents and other events that caused the deaths of those who discovered his identity as the Antichrist (and therefore threatened his life, the secrecy of his identity, and/or his rise to power) were influenced by Lucifer, Damien's father.

Some fans believed[citation needed] that The Raven was the form which Satan took on Earth.

The Omen III: The Final Conflict

When Damien sensed that the Second Coming of Christ was approaching, he expressed rage and blame towards Christ for Lucifer's exile from Heaven. Damien also vowed to him that he would avenge his exile from Heaven by destroying Christ, but Damien ultimately failed and died.