The Omen Wiki
Register
Don't have an account?
Sign In
Advertisement
in: Characters, The Omen 1976 characters, Servants of Hell, Deceased characters 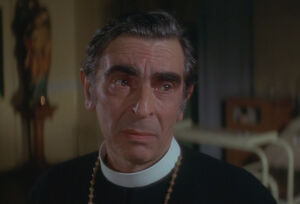 Father Spiletto was an Italian priest at a Catholic hospital, and a secret apostate of Hell. He was horribly burnt in a fire and left mute.

Father Spiletto was a priest at a Catholic hospital in Rome, Italy; he was one of the secret disciples of Satan and the Head of the Roman Satanic Covenance, and was involved in the plot to deliver the Antichrist and ensure his rise to power. When the Antichrist was born at Spiletto's hospital at 6 AM on 6 June, the Thorn family's newborn baby was secretly murdered to get the Antichrist adopted by them.

It was Spiletto who initiated Brennan to the Devil worship and was him who chose Brennan and Mrs. Baylock (under the name of Sister Teresa) as the elected who will directly take part in the birth of the Antichrist in Rome.

When Robert Thorn comes to the hospital to see his newborn son, Spiletto tells him that it died, and lies to him that it was stillborn. When Robert becomes unsure of how to explain it to his wife Kathy due to her emotional instability, Spiletto convinces him to instead adopt another, orphaned baby boy and to tell Kathy that it is their son. Robert is reluctant to do this at first, but Spiletto eventually convinces him otherwise and gives him the baby Antichrist to switch with the dead Thorn baby.

At some point later in the year, when a fire started in the hospital, Spiletto survived but the left side of his face was horribly burnt and disfigured, and he was left mute and catatonic except for some movement in his left hand. He was sent to the Monastery of San Benedetto in Subiaco, where he managed to confess to the priests that he had turned from God by writing signs and symbols of it down with his left hand.

Five years after the fire at the hospital, Robert Thorn and Keith Jennings go to Father Spiletto at the monastery to find out more about the Antichrist Damien's biological mother. When Robert demands to know where Damien's mother is, Spiletto writes down to him that she is buried in Cerveteri.

At some point, Spiletto passed away, but not before revealing to Father De Carlo that the Antichrist is Damien Thorn.