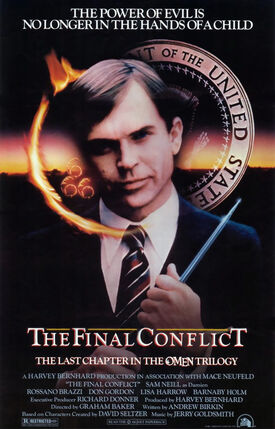 The Final Conflict (also known as Omen III: The Final Conflict) is a 1981 American horror film directed by Graham Baker, and the third installment in The Omen film series. Starring Sam Neill, Lisa Harrow and Rossano Brazzi, the film tells the progression of the now adult Damien Thorn in a position of earthly power, set against the countdown to the Second Coming of Christ, and the attempts by a group of priests to kill the Antichrist. The film was released in theatres on March 20, 1981.

An alignment of the stars in the Cassiopeia constellation causes the generation of a superstar, described as a second Star of Bethlehem. Damien realizes it is a sign of the Second Coming of Christ and, believing that Christ has returned as a mortal child, he orders all boys in England born on the morning of March 24 (when the Cassiopeia alignment occurred) to be killed in order to prevent the Christ Child's return to power. One of Thorn's disciples, Harvey Dean, attempts to hide that his own son was born on that date.

Damien has also become romantically involved with journalist Kate Reynolds (Lisa Harrow), a relationship which puts his plans for political dominion on hold. But Damien is not deterred and focuses his attention on her young son Peter (Barnaby Holm), whom Thorn takes as a disciple, manipulating the boy's desire for a father figure.

Meanwhile, Father De Carlo (Rossano Brazzi) and six priests hunt for Damien, hoping to kill him before he can find and destroy the Christ Child. They are each armed with one of the Seven Daggers of Megiddo, the only ancient holy weapons that can harm the Antichrist. However, Damien eliminates the priests in separate confrontations until only De Carlo remains.

Throughout England, all male infants born on March 24th are executed by Damien's disciples until only Dean and his wife, Barbara's child is left. Damien confronts Dean about Barbara talking with De Carlo, and demands that he kill his son. Dean refuses and flees. Meanwhile, Damien's dog threatens the child, but Barbara drives it away. She then has a vision of her son as a burnt creature. This causes her to fall under Damien's control and she kills Dean and the child with an iron.

Finally, De Carlo tells Reynolds that the Christ Child is out of Damien's reach, in spite of his efforts. In hopes of getting her son back, she agrees to take Damien to the ruin where the Christ Child is in exchange for Peter. This is part of De Carlo's plan to lure him into a trap. He hopes to ambush Damien and catch him off guard, since his attention will be directed towards confronting Christ. The plan backfires when Damien spots De Carlo first and uses Peter as a human shield against the dagger. As Peter lies dying, Damien strangles the stunned Father De Carlo before leaving him and Kate to find Christ.

In a desperate bid to salvage his waning power, Damien calls out for Christ to appear before him. As he does, Kate sneaks up behind Damien with one of the daggers and stabs him in the back. Dying, Damien staggers to the ruin's altar, and Jesus Christ appears in a flash in the sky. Damien's last words to Christ are "Nazarene... You have won... nothing!" before dying of his Dagger-inflicted wound. The film ends with scripture of Revelation chapter 21, verse 4 indicating that when Christ returns to earth, peace will reign for all who faithfully awaited the Lord's return.