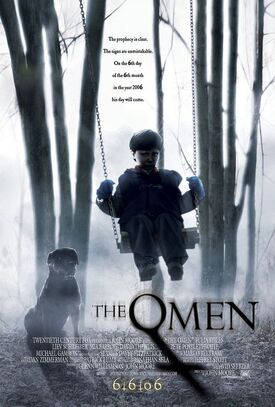 The Omen (also known as The Omen: 666) is a 2006 remake of Richard Donner's The Omen of 1976 and a part of The Omen series. Directed by John Moore and written by David Seltzer, the film stars Liev Schreiber, Julia Stiles and Seamus Davey-Fitzpatrick. It was released worldwide on June 6, 2006.

At 6 AM on 6 June, the Vatican Observatory notices a comet in the sky. At a meeting between the leaders of the Church, a cardinal, Fabretti (Carlos Sabatini), interprets the comet and other events and disasters that have occurred as signs of the eve of Armageddon.

Meanwhile, Robert Thorn (Liev Schreiber), an American diplomat stationed in Italy, rushes to a hospital in Rome where his wife Katherine has gone into labor. Once he arrives, he is told that the baby died soon after birth. To spare Kate (Julia Stiles) then anguish of the child's death, Robert accepts the suggestion of the hospital's Catholic priest, Father Spiletto (Giovanni Lombardo Radice) to secretly adopt another newborn whose mother died in childbirth. Robert and Kate raise the boy as their own and name him Damien.

Robert's career ascends over the course of the next five years. He is named Deputy Ambassador to the United Kingdom, and after the ambassador dies in a bizarre accident, Robert becomes Ambassador and settles into a large estate in London. However, disturbing events start to revolve around Damien (Seamus Davey-Fitzpatrick), the most prominent being his nanny hanging herself at his birthday party, driven to do so by a large black dog.

Soon afterward, Robert is approached by Father Brennan (Pete Postlethwaite), who delivers an eerie warning and knows the truth about Damien's birth and more, at which point Robert has him escorted out. Meanwhile, photographer Keith Jennings (David Thewlis) finds out that several of his photographs contain mysterious signs, later revealed to foreshadow a series of shocking deaths.

A new nanny, Mrs. Baylock (Mia Farrow), is hired and tells Damien that she has been sent to protect him. Tension between Mrs. Baylock and the Thorns rises when the nanny starts to make decisions against their wishes, including bringing a large watchdog without their consent. On the way to the previous nanny's funeral, Damien becomes terrified as they approach the church, attacking Kate in a fit of fear.

That night, Kate experiences a premonition/nightmare about Damien. The following day a field trip to the city zoo ends with various species of primates becoming aggressive at the sight of Damien. Kate suspects that there is something not right about her son. Robert however brushes off her concerns. That night, Kate again experiences a nightmare about Damien and awakes in panic. She goes downstairs and discovers Damien making a sandwich in the middle of the night. She calls to him but he simply walks past her with an ominous stare.

Robert again meets with Father Brennan, who tells him that Damien must die and a man called Bugenhagen, located in Tel Megiddo, can show him how. Enraged, Robert sends him away again. Father Brennan, sensing something evil, with a torrential storm around, attempts to seek shelter in a church, but the door is mysteriously bolted shut. A lightning bolt strikes the church steeple, causing him to be impaled by a large steel rod which falls from the roof of the church.

Upon discovering she is pregnant, Katherine wants to have an abortion, as she is afraid to have another child like Damien. Robert however is against it. Shortly afterward, Kate is knocked off the landing by Damien riding his scooter, and tumbles over the balcony. He refuses her pleas for help and she falls to the first floor, severely injuring herself and also resulting in the loss of the unborn baby. After the hospitalized Kate begs Robert not to "let him kill [her]", Robert finally accepts that something is amiss with Damien.

Fueled by the warnings given to him by Father Brennan and further information from Keith Jennings, Robert and Jennings go in search of Damien's biological mother. After meeting a nun in Rome, they discover that the hospital where Damien was born burned down. They then go to a monastery in Subiaco and meet Father Spiletto, now wheelchair-ridden and badly disfigured, who tells them where Damien's mother is buried.

They find the grave of Maria Avedici Santoya, Damien's real mother, in the old cemetery of Cerveteri, and find the skeleton of a jackal inside; revealing that Damien cannot be human. In the neighboring tomb, Robert discovers the corpse of a human infant with a cracked skull; revealing that his biological son wasn't stillborn, and was murdered at birth. He and Jennings are then attacked by a pack of black dogs, and barely escape over the fence. Meanwhile, Mrs. Baylock visits Kate in the hospital under the pretense of delivering flowers and then induces an air embolism by introducing air from an empty syringe into Kate's IV, mercilessly murdering her.

After learning of Kate's death, Robert decides to follow Brennan's advice and kill Damien. He goes to Megiddo and meets Bugenhagen (Michael Gambon), who tells them that Damien is the long-prophesized Antichrist, and that the only way to destroy him is to take him to holy ground and kill him with the seven sacrificial daggers of Megiddo. To prove his claims, Bugenhagen tells Robert to search Damien for a birthmark in the shape of three sixes. Robert at first denies that the son he has raised is the Son of Satan, throws the daggers away and leaves. However, Jennings is determined to go through with the plan, and goes to pick up the daggers. While Jennings is collecting the daggers, he is decapitated by a falling sign, causing Robert to change his mind.

After a long pensive flight back to London, Robert arrives home during a torrential storm. The watchdog attacks, but Robert manages to trap it. Robert then goes upstairs to Damien's room and quietly cuts a large lock of Damien's hair off to reveal a 666 birthmark on his scalp, confirming that Damien is indeed the Antichrist. Mrs. Baylock attacks suddenly, but Robert is able to fight her off. He takes Damien outside to his car. Mrs. Baylock pursues them and Robert kills her by running her over. Robert drives the Lexus frantically, crashing through his iron gate with law enforcement officers pursuing. He drives to a church to kill Damien on consecrated ground, but as he is about to stab Damien with the first dagger, he is killed by an officer of the Diplomatic Protection Group.

Robert's funeral - shown in parallel to the death of the Pope - is attended by the President of the United States. At first, it cannot be told whether or not Robert was able to stab Damien before he was shot; but it is then shown that the President is with Damien, both with backs to the camera. The last shot shows Damien slowly turning around, giving the camera a sinister smile.

Differences from the Original